Scar Tissue and Hypermobility: How They Relate and What You Can Do About It10 min read

December 20, 2020 / Kate Skinner / Comments Off on Scar Tissue and Hypermobility: How They Relate and What You Can Do About It

Hypermobility can be just one piece within a complicated puzzle. If you are hypermobile, you also can have adjoining pieces that affect it and tend to aggravate it and make it a bigger problem.

These additional problems can explain why you frequently have an issue that’s supposedly healed and resolved, but you continue to have pain and ongoing problems.

According to Healthline, scar tissue refers to thick, fibrous tissues that take the place of healthy ones that have been damaged. It is when the body undergoes trauma or inflammation of your cells and tissue. In some cases, scar tissues link to form an adhesion, which is a band of scar tissue. This often happens with surgery and the more surgeries the greater the amount of scar tissue.

Healthy tissues can be damaged from infection, significant injury, or surgery. Tissue damage may be internal or external, and scar tissue can form due to disease or any kind of inflammatory response.

Take a knee, for example. Scar tissue on the knee would be like extra adhesions that behave like Velcro, and they tend to pull on the kneecap.

As hinted above, scar tissue can form due to a variety of reasons.

It can be related to an injury, surgery, or even infection. It can also be associated with the appearance of a really large bruise.

The more issues you have and the shorter the period of time, the worse your scar tissue gets or, the bigger the opportunity to develop scar tissue will persist.

When I hear that people have had multiple surgeries in a short period of time, or have dislocated their knee cap numerous times over a few years, my mind immediately goes to “we’re probably going to have a scar tissue component here.”

One of the things that we know about people who have hypermobility is that they tend to make scar tissue, and it tends to be slightly abnormal.

A lot of times, we’ll see more extensive scars in people with hypermobility. Also, these scars tend to get more keloid. They can be raised up, or they can be paper-thin ones with striation (these last ones tend to be the ones I get).

Finally, with people suffering from hypermobility, scar tissue forms in a broader range around that injury area, usually more than what seems reasonable for that particular injury type.

Scar tissue can be seen and documented during surgery, but it does not tend to be diagnosed. Everyone has some version of scar tissue, and just like mobility, there’s a spectrum. Some of us are really good at creating a lot of scar tissue. Others, not so much so.

So, if you have hypermobility and you have a scar tissue problem, your issues tend to magnify.

How Do You Know If You Have A Scar Tissue Issue?

The first red flag you need to identify is if that scar doesn’t move very well with you.

If you have a scar and it’s healed, and everything is normal, it should look like a line, like a freckle, or just as if somebody had taken a marker and drawn a line on top of your skin. You should see where it is, but it should move along with your skin in the area.

So that way, if you are bending and using the area, that scar should move with that.

On the contrary, if you get puckering, if you get a lip or sort of dimples around it from those scars. That is a scar tissue issue.

If you have surgery, any orthopedic surgeon will get you moving right away after surgery because we know scar tissue is an issue. But a lot of times, you can have some of these other things that don’t get addressed, and you are just told to protect the injured area and keep it still.

While that might be helpful sometimes, more frequently, that environment allows that scar tissue to build, and if it attaches to structures underneath, that becomes a problem.

In my practice, I see many clients with scar tissue issues. They usually come to get help within one to two years after surgery or injury. The reason for this is that as things heal up, it takes time for that scar tissue to spread and become problematic and because the previous issue has healed they don’t connect their new problem to their old.

Most of them had been feeling that things were healing and getting better, but suddenly started having problems again or developing new issues and pain.

Still not sure if you have a scar tissue issue or not? Take some time to go through these steps:

If any of these apply to you, you may have a scar tissue issue.

The good news is that you can look at it and either get treatment for or start to self-treat these issues yourself.

Remember, if you are somebody with hypermobility who has bruising sensitivity, you have to be careful. You can start working on loosening up that scar tissue but don’t overdo it, or you’ll get bruised.

So, the first step. Figure out where that scar tissue is. For example, with knees, it’s often on that outside upper corner of that knee where that kneecap pulls up. But, it can be anywhere that there is a scar or a lot of restriction kind of swelling the area.

Secondly, grab a pen and draw a dot in that area. Then, don’t just rub on top of that dot, but actually, connect with that tissue and move the tissue across the muscle or bone or fash underneath.

Now, if that’s really painful, you can back off. You don’t have to create a lot of pain. It’s not like you’re trying to push your fingers through your hand or your knee. You just want to connect with whatever is the tissue underneath them and move it in all different directions.

If the area feels too sensitive, keep slowly working on it. That sensitivity usually goes away fairly quickly. But in the beginning, it could be kind of icky.

A more aggressive option is mobilization using a spoon, and it works very well.

The key with this is not about more force, but it is good to help you feel what is going on underneath your skin. The technique goes as follows:

A good rule of thumb is that you can cover that area affected three times in each direction. So if you want to try this technique, go all the way across three times and then flip your spoon around, and go three times back. That’s it.

You can do that up to twice a week. If you do this all day long, you will bruise yourself, especially if you’re sensitive to bruising, which is common for people with hypermobility.

Use the spoon technique sparingly. It can be a great assessment piece, especially when you start to feel like you’re making stuff up.

Have you ever been on that boat where you’re not sure if this is a real thing or not? This technique helps give you that evidence.

It also helps if you’re trying to figure out the difference between your problem side and your non-problem side, check the other side. And if they feel reasonably similar, then that’s probably more of your normal. If they feel different, then that helps give you evidence of that gap.

What You Need to Know About Treatment for Scar Tissue

There are treatment options to get scar tissue moving and get your body to heal it up that work really well.

However, keep in mind that surgery doesn’t tend to be one of them. Surgery to fix scar tissue creates more scar tissue. Please don’t look at that as an option to fix it unless it’s for something specific that your doctor really feels is necessary.

Frequently scar tissue can affect nerves, especially if the surgery or issue was close to nerves like it is in the back. You can also get nerve damage from surgeries entirely separate from scar tissue and utterly different from hypermobility.

Once again, we have our hypermobility, but you can have all these other pieces that require a different approach. And nerve pain is a different animal to treat.

Often, with nerve pain, you want to touch into the tension and then back off. You want to move the nerve because the nerve is more like a string, not a rubber band. It’s not going to stretch.

If it’s irritated on one end, putting any pressure on the other side just makes it fire up. And the more you do that, the faster it fires, the harder it fires, and the more painful it becomes.

It is a good rule of thumb to think of it more in terms of a sunburn any time you’re dealing with nerve pain.

To do that, we want to stabilize the anchor or the side where it’s coming from. And we want to work on moving through happy ranges.

Again, the good news is nerve pain issues do settle down and heal up. However, it would be best if you learned to manage them, which means learning good techniques is critical.

Understanding what to do and how to take care of your scar tissue and related nerve pain can help you progress. These problems don’t easily go away, but the education piece is critical if you want to make some progress.

Keep those things in mind. Especially if you also have hypermobility.

With hypermobility, we need to have that stability and control. We need to be aware of our movement because if there is a nerve issue or scar tissue issue, you will start moving your body around it causing other problems. As a hypermobile person, you can do this to compensate, but that doesn’t mean you should long-term.

Finally, make sure you get the right support to clarify which things can get better. Sometimes with scar tissue, we’re told that it’s healed up, and we’re fine when there are things that we could do to help improve scar tissue limitations and issues.

If you’re somebody who’s struggling, please continue to look and find other options that are out there. There are some, I promise. 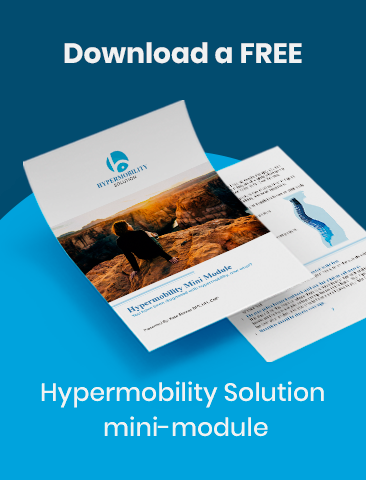